Portsmouth-based locksmith Wayne Elson knows how to make an impact. It is why he’s nicknamed ‘Bomber’!

The 53-year-old, who qualified as a locksmith after completing two of MPL’s training courses, earned his moniker after discovering an unexploded World War 2 bomb!

Wayne explained: “I was metal detecting in some local woods and found a piece of WW2 ordnance, just one of over 300,000 dropped on the Portsmouth area by the Nazis during the war, that I decided to put in my van. After a couple of days my wife rang the Police and they sent bomb disposal experts over.

“The next day the bomb was taken to a safe spot, covered in sand bags and detonated. It made quite a bang and I’ve been known as Bomber ever since!” added Wayne.

When it comes to his new stock in trade Wayne couldn’t be happier: “Becoming a locksmith is one of the best decisions I’ve made in life. It’s given me freedom to work on my terms and I’d definitely recommend it.

“MPL offer very good, in depth courses that are easily understandable and provide you with lots of confidence as well as the required skills. We’re put up in a nice hotel for the five days of training and there’s a great atmosphere that develops amongst those taking the course.

“I found it so useful I’ve recently returned for a second course that tops up and adds to my knowledge,” concluded Wayne.

Clearly Wayne ‘Bomber’ Elson has found his own dynamite career path thanks to MPL …and the bomb disposal squad! 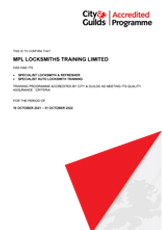